Alleviating the symptoms of an aging prostate

Growing bald isn’t the only unwelcome sign of advancing years; for most men, aging also goes hand in hand with bothersome lower urinary tract symptoms: night time awakenings for trips to the bathroom, the sudden and frequent urge to urinate, painful urination, even erectile dysfunction.

At the root of these issues may be the progressive enlargement of the prostate gland, which over time can grow from its original walnut-like size to reach the proportions of a lemon. Although prostate enlargement may be a sign of cancer, the most common cause is a non-malignant condition known as benign prostatic hyperplasia, which involves the growth of excess prostate tissue that eventually can obstructthe urinary tract, leading to impeded urine flow and troubling symptoms.

The good news is, through the use of phytotherapies (plant-derived treatments), nutraceuticals, dietary and lifestyle recommendations, and conventional drugs when necessary, the tissue-proliferating mechanisms that drive prostate enlargement can be attenuated, resulting in urinary symptom relief and improved quality of life for men over 40.

The prostate is a small gland of the male reproductive system that sits under the bladder and surrounds the urethra, the duct that carries urine from the bladder through the penis and out for excretion. Its main function is the production of seminal fluid. Over time, in most men, the prostate undergoes structural changes. By the time a man reaches his fifth decade, prostate cells can begin to multiply and pinch off the urethra, resulting in decreased urine flow. Even a small amount of growth can produce lower urinary tract symptoms (abbreviated “LUTS”), which include:

The incidence of LUTS related to prostate enlargement is age-related, affecting approximately 50% of men age 60 to 90% of men age 85. (1) Obviously, safe and effective treatments are needed to counter this rising prevalence. 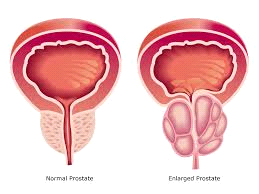 The most common condition associated with a swollen prostate is benign prostatic hyperplasia (BPH). As the name implies, BPH involves the non-malignant (not associated with cancer) proliferation of cells in the prostate and formation of excess tissue, technically called “hyperplasia.” Besides annoying urinary symptoms, BPH can increase the risk of kidney damage and bladder infections; it can even lead to erectile dysfunction (ED).(2) A major factor in the development of hyperplasia, whether benign or malignant, is the influence of testosterone metabolites on the prostate, a hormone-sensitive organ.

One of these metabolites is dihydrotestosterone (DHT), converted from testosterone by the enzyme 5α-reductase.DHT is highly potent, and increased levels are associated with BPH and prostate cancer (3) (as well as hair loss, since 5α–reductase is also found in the scalp). Aging men also exhibit higher levels of another enzyme, aromatase, which converts testosterone into estrogen. (3) Like DHT, increased levels of estrogen promote cell proliferation. (3) Since BPH is an androgen- and estrogen-sensitive condition, an effective therapeutic strategy is to limit the activity of these enzymes (5α-reductase and aromatase), preventing the conversion of testosterone to hyperplasia-promoting DHT and estrogen. Below, we’ll see both drug and phytotherapies that target these enzymes.

Note: This discussion focuses on the major non-malignant cause of prostate enlargement, BPH, although occasional reference will be made to prostate cancer prevention (since many of the natural and pharmacological agents outlined below have multiple mechanisms and benefits). A full discussion of prostate cancer is outside the scope of this article.

The foundation that all men should establish to avoid the risk of, or ameliorate, prostate- related symptoms are a low fat, vegetable-rich whole foods diet and a healthy lifestyle. Meat and dairy products should be limited or eliminated, while generous servings of vegetables (including those high in carotenoids and Vitamin C) should be piled high on most plates. Additional nutritional support from supplemental zinc, selenium, vitamin C, lycopene, and essential fatty acids (EPA, DHA, and GLA) is also recommended, since all of these are beneficial in cases of BPH. Losing extra pounds, if necessary, maintaining an ideal body weight, controlling blood sugar, and exercising regularly will all lower the risk of BPH (and contribute to overall good health). These guidelines also apply to prostate cancer prevention (where cruciferous vegetables are particularly important in the diet, in addition to green tea, soy products, etc.).

On top of this foundation, the next level of support includes phytotherapies to alleviate symptoms in mild to moderate cases; in moderate to severe BPH/LUTS, drugs will likely be necessary. Peptide bioregulators may be beneficial in all cases, regardless of severity. Most men probably want to avoid surgery, especially in a sensitive part of the body, but surgical options do exist to either remove the prostate or reduce its size in order to relieve symptoms (although some readers might squirm to read this).

First, let’s look at standard pharmacological agents, of which there are several classes:

The above drugs are often used in combination. Although many of these are available through IAS, they should be used under the supervision of a physician. Note that certain of these conventional treatments for BPH (α1-adrenergic receptor blockers and 5α-reductase inhibitors) can cause sexual side effects, in addition to the ED that already accompanies many cases of BPH. Use of the natural remedies below combined with the lifestyle recommendations outlined earlier may decrease the need for, or lower the necessary dosage of, pharmacological agents, which will also result in a reduction of side effects.

As a side effect-free alternative to drugs, numerous phytotherapies have been shown to successfully treat mild to moderate BPH/LUTS. Prostate Pro-2™ is a comprehensive formula containing four plant extracts that work synergistically to relieve troublesome urinary symptoms and promote overall prostate health, without unwanted side effects. Dozens of trials have been performed on the efficacy of these medicinal plants in treating BPH/LUTS, separately or in combination, and in comparison against conventional drugs.

To put it in a nutshell, these clinically proven phytotherapies act by different pathways to target the underlying mechanisms leading to prostate-related urinary symptoms (and even cancer). In a combination formula, such as Prostate Pro2™, their potencies are even further enhanced, making this an invaluable product to include in your regimen to improve and support prostate health.

Now let’s discuss the prostate peptide bioregulator Libidon®. A major innovation in longevity therapies over the past few decades, led by Russian scientist Vladimir Khavinson, was the development of peptide bioregulators − short chains of amino acids (peptides) isolated from various animal tissues and organs. When purified and administered therapeutically, these peptides act at the genetic level to regenerate age-damaged tissues and restore the function of a particular organ. For example, retinal peptides initiate the formation of retinal and pigment cells in patients with retinal degeneration, thymic peptides stimulate immunity, and pineal peptides induce the aging pineal gland to manufacture melatonin. The mechanism behind these rejuvenating effects is complex: each short-chain peptide interacts with a gene’s DNA, transferring information encoded in its amino acid sequence and stimulating a process called protein synthesis, the manufacture of proteins according to the encoded genetic information. By “switching” on genes to synthesize specific proteins, peptide bioregulators can recover the structure and function of tissues and organs undergoing age-related deterioration. IAS carries a full range of 21 of these bioregulators (for organs ranging from adrenals to thyroid), including Libidon® for the prostate.

Khavinson and his team at the St. Petersburg Institute of Bioregulation and Gerontology have performed extensive research on the broad range of peptide bioregulators, including Libidon®, which was evaluated for its effect on a variety of prostate diseases. Khavinson’s experiments specifically on BPH involved administering, both intramuscularly and orally, prostate peptide bioregulators similar to Libidon® to BPH patients, which resulted in full or partial restoration of the normal tissue structure of the gland in 21 out of 27 cases; (34) in other words, in the majority of patients, age-related changes in prostate tissue were partially and in some case completely corrected. As a result of their regenerative potential, Khavinson recommends prostate peptide bioregulators (i.e., Libidon®) for all cases of BPH, from mild to severe.

Putting it all together – your plan for prostate health

Troubling symptoms resulting from an enlarged prostate are increasingly common in aging men; fortunately, as we’ve just seen, they are not inevitable, thanks to a variety of natural treatments and, if necessary, drugs.

The first step in preventing or ameliorating symptoms is to establish the foundation of dietary strategies and life style recommendations that we covered previously, with additional support from targeted nutraceuticals (zinc, selenium, etc.).

Next, phytotherapies should be added to relieve symptoms in mild to moderate cases of BPH/LUTS; Prostate Pro2™, a synergistic blend of four clinically proven botanical extracts, is an ideal choice for this purpose.

The peptide bioregulator Libidon® that acts by a unique and independent mechanism can also be included as another natural therapy for further support. If additional relief is needed in more severe cases, work with your health care professional in incorporating one or more conventional drugs to your regimen.

As mentioned, the use of phytotherapies combined with drug treatments will not only enhance the potencies of all of the active substances (pharmacological and natural), but will lower the necessary dosage of drug, and result in fewer side effects. Obviously, symptom relief may take some experimentation on your part − the natural therapies may be sufficient alone (Prostate Pro2™, Libidon® or both), or, in the worst cases, it may require the addition of a conventional drug(s) to reach an acceptable level of improvement.

However, by following the recommended lifestyle and dietary guidelines as a foundation to which you add an individually-tailored combination of natural treatments (and drugs, if necessary), you can relieve bothersome symptoms, while improving your overall health and quality of life.