Is Your Brain Clearing Beta-Amyloid, the Leading Cause of Alzheimer’s and Parkinson’s?

“When we skip sleep, we may be doing irreparable damage to the brain prematurely aging it. . .”

Until a few years ago, scientists thought that the brain did its own cleaning and recycling of waste both day and night. However, Professor Steven Coles of Stanford University has established that beta amyloid clearance in seniors is highly inefficient and incomplete. Indeed, he has further discovered that the brains of centenarians are loaded with these waste products (1). Thus, if you plan to live a healthy life beyond the age of 100, you should consider doing ought to do something about brain waste disposal.

Second, prominent scientists writing in the Journal of Neuroscience have revealed several new discoveries. The brain has its own clearing system separate from the body’s lymphatic system. This clearing system (glymphatic) only works when we’re sleeping. It uses glial cells on the brain’s surface to clean the cellular waste carried by a clear and watery cerebrospinal fluid (2). It’s interesting to note that during waking hours; only 5 percent of this glial cleaning system is active.

This glial or glymphatic system works as a parallel lymphatic system only for the enclosed and isolated brain. Glial cells work largely by maintaining homeostasis and protecting brain cells and neurons from free radical attack. Indeed, many years ago I tested and published research about the activity of human glial cells (3) in disarming the toxic superoxide anion radical in actively respiring glial cells. My unique findings indicated that the brain consumes daily pounds of oxygen that is converted into grams of reactive oxygen species (ROS) such as superoxide and hydrogen peroxide (4). Glial cells use superoxide dismutase (SOD) to deactivate superoxide to ordinary water; they also use catalase (see ACF228™), which deactivates hydrogen peroxide to water.

Third, other scientists have discovered another phenomenon of brain waste disposal with the help of advanced microscopes and dyeing techniques. They found that the brain’s fluid space (called the “interstitial space”) exceeded 20 percent of total brain volume during nocturnal hours (see Figure 1a). This allows for the free flow of watery cerebrospinal fluid and waste products. This process also encourages ready disposal of ROS and the toxins that are deactivated and eliminated by enzymes and nutrients (see ACF228™, SOD and catalase). As previously mentioned, 95 percent of this activity occurs during restful REM and delta sleep, or under anesthesia. Scientists now know that in the brains of mice the volume of the interstitial space expands by one-third during sleep, and this encourages more than a doubling of cleaning and elimination of brain waste! Significantly, Dr. Nedergaard and his colleagues have surprisingly found that during waking hours almost no inflow of cerebrospinal fluid into the brain occurs (see Figure 1b). 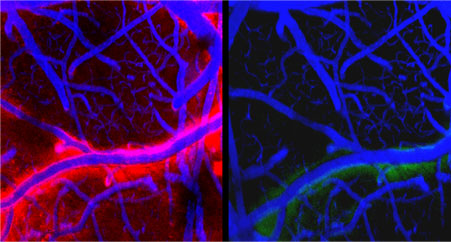 In our highly active and stressed modern lives, some 80 percent of working adults suffer some degree of sleep deprivation. We are often only sleeping approximately 6 hours nightly when we really need 8 or 9 hours of sleep, as was common 100 years ago. Thus, up to 70 million Americans suffer from some sleep loss resulting in the accumulation of brain waste such as beta amyloid and tau proteins. These two toxins are known to accelerate neurodegenerative diseases such as Alzheimer’s and Parkinson’s.

In addition to the possibility of suffering from these terrible diseases of aging, sleep-deficient people are hindered in their concentration and creativity. As Dr. Veasey stated in a recent Journal of Neuroscience article: “When we’re sleep deprived, we can’t integrate or put together facts.” Key neurons involved in alertness become impaired due to the buildup of toxic proteins associated with neural degeneration and aging. These toxic proteins may be partially negated by daily supplementing with vasopressin (Vaso-Pro™) and oxytocin sprays (Oxy-Pro™) -both essential neural proteins, and by using the Russian peptide bioregulators that are newly available in the West, but that were tested extensively for 35 years by the Soviet military during the Cold War.

Furthermore, recent research by Dr. Veasey and others has revealed that: “Recovery from sleep loss is slower than we’d thought. We used to think that after a bit of recovery sleep, you should be fine. But this work shows you’re not.” He also stated: “. . . when we skip sleep, we may be doing irreparable damage to the brain, prematurely aging it or setting it up for heightened vulnerability to other insults [damages].”

Practically speaking, I use Oxy-Pro™ and Vaso-Pro™ sprays in my practice along with additional natural sleep aids, such as MZS™ (time-release melatonin ZNSE), that encourage deep sleep and enhance the sleep experience. On the other hand, popular synthetic sleep aids, such as Ambien® and Lunestra®, have shown no evidence that they are as effective in inducing natural sleep as natural ingredients.

I am supported in my views from none other than Dr. Thomas R. Insel, MD, Director of the National Institute of Mental Health (NIMH).

Director of the National Institute of Mental Health Has Studied and Approves of Vasopressin and Oxytocin!

More than 20 years ago, Dr. Insel and his research group studied vasopressin and oxytocin as necessary and critical brain proteins. In 1993, he published his findings in the leading biological science journal, Nature. In that article, he reported that vasopressin and even oxytocin are “both necessary and sufficient for selective aggression and partner preference formation.” He and the National Institute of Mental Health currently recognize that both oxytocin and vasopressin are the focus of intense scientific interest regarding the modulation of social behavior and normal bonding instincts in mammals. In a recent blog post, he questioned the wisdom of long-term use of synthetic antipsychotic drugs in patients. He believes that people would be better if they were not taking those medications. He is quoted as saying: “We’ve had this huge increase in the use of all interventions, a 250 percent increase in use of antipsychotics, without any change in the morbidity or mortality in people with mental disorders; it hasn’t budged.” In another blog, Dr. Insel wrote that the DSM-5, a standard practice manual for all psychiatrists, was “at best a dictionary” and “not scientifically valid.” Indeed, some of these standardized treatments that are followed blindly by practicing psychiatrists are not evidenced based; instead, they rely on the marketing skills of Big Pharma and their expensive patented drugs.

Other leading psychiatrists, such as Professor Allen Frances, MD of Duke University, stated that Dr. Insel and his NIMH are “betting the house on the long shot that neuroscience will come up with answers to help people with serious mental illness.”

Thus, I encourage everyone to take seriously the amazing healing powers of these two unique and essential brain proteins, vasopressin and oxytocin (Vaso-Pro™ and Oxy-Pro™), and to avoid many of the patented and expensive antipsychotics typically prescribed today.

Further Research Regarding the Removal of Neural Trash

During recent years, scientists have found that beta amyloid accumulation increases receptor signaling in the brain (5, 6). These researchers have also discovered that beta amyloid (Ab) accumulates in vivo! Furthermore, in some lab mice, mortality was reduced with the help of supplemental IGF-1 (5, 6). These wonderful results are in stark contrast to the mortality studies of typical antipsychotics.

Humans sleep so our brains can take out our neural trash. The reason for sleep is to take out neural trash. We should avoid the above-mentioned prescription drugs that do not aid the brain in truly sound sleep. Still worse, we dare not employ anesthetics like the Propofol® that singer Michael Jackson used for his insomnia.

Instead, we should be picking up our brain trash where it occurs in order to target the brain’s metabolic processes. Thus, we should strive to avoid filing our brains with beta amyloid and tau proteins, especially during our senior years (1). We should also be trying to expand the brain’s interstitial space with natural sleep aids such as bio-identical hormone replacement therapy (BHRT), e.g., Armour® thyroid, Oxy-Pro™, Vaso-Pro™, Esnatri™ triple estrogens, DHEA, vitamin D3, etc. These will help improve REM and delta sleep and perhaps even prevent diseases such as Alzheimer’s and Parkinson’s. In my practice, I encourage the daily consumption of a healthier and more natural Paleolithic diet that’s rich in fresh organic vegetables, fruits, seeds, and nuts and I encourage people to avoid high glycemic foods.

Lastly, my current challenge is to increase the removal of beta amyloid and tau proteins at night when the brain’s interstitial space is wide-open and metabolically active. I believe that this can only be achieved at present by embracing natural remedies, especially BHRT and the master hormones hGH, IGF-1 and MSH2.

In the coming decades, researchers will be inventing various substances that should expand the interstitial space by 20 percent, day and night, and this increase may mean that we can avoid sleeping altogether!